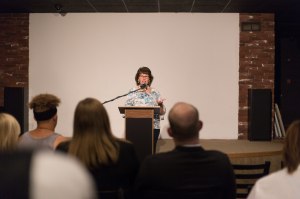 Feel free to contact me if you’re interested in hosting me for a reading, class, and/or workshop. I am willing to teach/read over Zoom or in person. I charge a reasonable honorarium fee and just ask that you also cover all my travel expenses.

I will be doing a joint reading with acclaimed playwright, poet, and novelist Angela Jackson-Brown at Lit Youngstown’s 2021 Literary Festival to be held on October 7-9. Our creative reading is entitled, The Literary Intersection of the South and the Midwest: A Cross-Racial Reading Exposing and Dismantling Whiteness. Lit Youngstown is an annual literary festival, and Karen Schubert, the director, pulled off a wonderful Zoom event last year. With all of us fully vaccinated, we look forward to reading in person this year!

My colleague Dan Bowman and I also did a reading for Taylor University’s “Taylor Talks” series at Homecoming on Zoom. I read some new poems as well as work from my books; Dan read from his new book, On the Spectrum: Autism, Faith, & the Gifts of Neurodiversity, which is available for pre-order now.

My essay “Spiritus Mundi” has placed as a finalist in the Midwest Review‘s 2021 Great Midwest Creative Nonfiction Contest. The winning essay will be announced soon.

My poem “The Color White,” which appears on pp. 6-9 in the Fall 2020 issue of Tipton Poetry Journal, was nominated for a Pushcart Prize. This was my sixth poem to be nominated for this prestigious prize. Many thanks to TPJ‘s editors for this honor.

My poem “Palm Sunday” from Full Worm Moon, will appear in New York Quarterly’s forthcoming anthology, Without a Doubt: poems illuminating faith. In addition, the anthology Keystone: Contemporary Poets on Pennsylvania, edited by Jerry Wemple and Marjorie Maddox, will likewise include my poetry. The anthology will be published in 2025 in celebration of the 20th anniversary of Common Wealth: Contemporary Poets on Pennsylvania.

Full Worm Moon won one of five 2018 Woodrow Hall Top Shelf Awards from Poetry Jumps Off the Shelf, curated by Wisconsin poet Shoshauna Shy. Shy’s award letter noted how more than twenty poems in my collection resonated deeply with her and have proved memorable.

Full Worm Moon received honorable mention from the Conference of Christianity and Literature in its 2018 Book-of-the-Year Award competition. The CCL judges wrote the following about my book: “The judges also wish to make honorable mention of Julie L Moore’s collection of poems, Full Worm Moon. . . . Moore’s book shows a grace of style and power and depth of feeling that deserves recognition.”

“Tear,” “Compline,” and “The Poetry Performs in the Theatre of Cows,” three poems from my book, Full Worm Moon, were nominated for a Pushcart Prize in 2018. Previously, two other poems from the same book, “The Problem with School” and “Certainty,” were also nominated for the same prize. Thus, five poems included in Full Worm Moon are now Pushcart Prize nominees! For more information about this book, visit my “Books” page.

I’m pleased to announce that my fourth full-length collection of poetry, Full Worm Moon, has been published by Cascade Books in its Poiema Poetry Series. It is an honor to be included in this series again and a joy to have worked with editor Don Martin once more. You can read some of the poems that appear in Full Worm Moon on my books and links pages.

In addition, five of my poems appear in the anthology, Adam, Eve, and the Riders of the Apocalypse: 39 Contemporary Poets on the Characters of the Bible, edited by D.S. Martin in The Poiema Poetry Series by Cascade Books.

My poetry also appears in several new anthologies. “Requiem for the Liberal Arts” is included in How Higher Education Feels: Commentaries on Poems That Illuminate Emotions in Learning and Teaching, edited by Kathleen M. Quinlan (Oxford Learning Institute, University of Oxford, UK). My poems “Clifton Gorge,” “The Grass Grows Ordinary,” “Remember Blessing,” and “The Painted Lady and the Thistle,” all in Particular Scandals, also appear in The Turning Aside: The Kingdom Poets Book of Contemporary Christian Poetry, edited by D.S. Martin (Wipf & Stock). My poems “This is the landscape left” and “Following the Light” were published in A Rustling and Waking Within: Poems Inspired by the Arts in Ohio, edited by Sharon Mooney (OPA). In addition, “Clifton Gorge,” “Prufrock in My Backyard,” “The Poet Performs in the Theatre of Cows,” and “Recovery” appear in From the Tower: Poetry in Honor of Conrad Balliet, edited by Steve Broidy (Main Street Rag Publishing Company). And “Voice” will be reprinted in By One’s Own Hand: Writing About Suicide, being edited by Gayle Brandeis and Ruth Nolan.